Having a MacBook Pro that seems to be continually low on disk space, I set out to tidy up a bit using the excellent and free OmniDiskSweeper. It will help you identify where all your disk space is going. Use with caution though, and always have a recent backup.

After tidying up all over the file system, I noticed that the Safari cache was enourmous … 1.2GB in my case. Further investigation revealed that most of that space was taken up by Webpage Previews, used by the top sites feature in Safari 4. As I don’t care for that feature, I have disabled it with the following command

But, that doesn’t prevent Safari 4 from writing a lot of files into the filesystem. So either I would have to remove them manually at intervals … but most developers prefer to automate trivial tasks.

So, to remove all the unwanted files from the filesystem, I created the following script, which I named remove_webpage_previews

It finds all non-directory entries in the Webpage Previews folder with a modification time greater than one day. If you like using the top sites feature, you might want to use something like 14-30 days.

I keep scripts such as these in ~/bin, but you may keep them elsewhere.

To make the script executable, you need to set it as executable in the filesystem using the following command:

First, measure how much space is currently being taken up by webpage previews

Run the cleanup script, this might take up to a few minutes to execute, if you have many files … I had a few thousand to begin with.

Measure again, hopefully you should see a difference

If your script is succesful, you should register it with launchd, and have it run automatically at intervals.

For this purpose, I use the very nice tool Lingon by Peter Borg.

I’ve set up my script to run every 6 hours, when I am logged in. 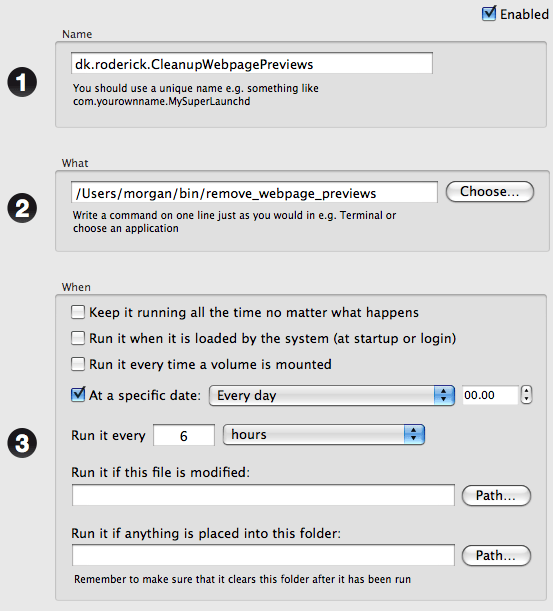 That is it, your computer will now automatically cleanup webpage previews, and your disk won’t fill up as fast :-)